skip to main | skip to sidebar

Hey Ducks fans and dedicated readers, as you may have noticed this blog died. RIP! The good news is, my writing hasn't died, nor has my Dedication to the Ducks. You can find my ramblings and ideas over at Aery's Sports. When one good thing comes to an end, a new better life is created. If you follow me on my new blogging journey I'd love to have you along for the ride. I'm currently working with the Aery's staff to get a total Ducks page put together that is strictly Anaheim based. Until then I'm in the general NHL listing "Intermission Report". Here is the link you need: FOLLOW ME! I'll come back here with one final post that has the direct link to my new home. Until then, see you at the Intermission Report at Aery's Sports! Thank You! - Vicky Swanson
Posted by DucksFanZone at 7:59 PM No comments: 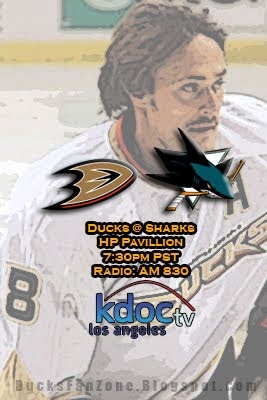 Posted by DucksFanZone at 3:46 PM No comments:

Email ThisBlogThis!Share to TwitterShare to FacebookShare to Pinterest
Labels: 2011-12, Ducks at Sharks, Game 35 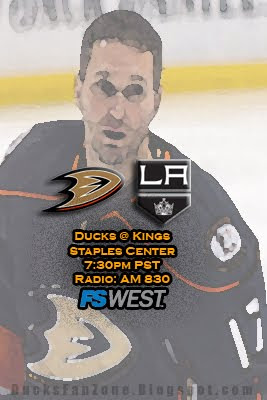 Posted by DucksFanZone at 4:41 PM No comments:

Email ThisBlogThis!Share to TwitterShare to FacebookShare to Pinterest
Labels: 2011-12, Ducks at Kings, Game 34 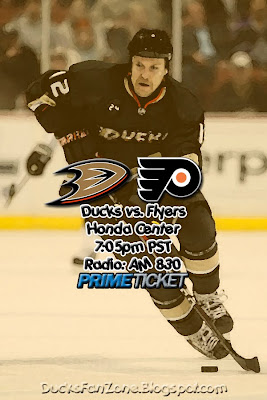 Posted by DucksFanZone at 10:59 AM No comments:

Email ThisBlogThis!Share to TwitterShare to FacebookShare to Pinterest
Labels: 2011-12, Ducks vs. Flyers, Game 25 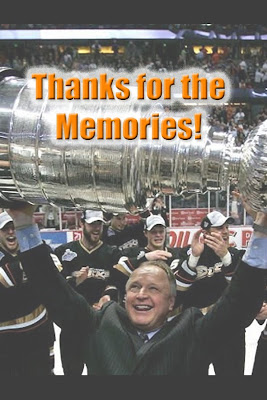 The Ducks have announced that they have named Bruce Boudreau head coach, replacing Randy Carlyle. The club has also relieved Assistant Coaches Dave Farrish and Mike Foligno, and Video Coordinator Joe Trotta of their duties. Brad Lauer has been added to the Ducks staff as an assistant coach. One additional assistant will be named at a later date.

“This was an extremely difficult decision,” said Executive Vice President/General Manager Bob Murray. “Randy is a terrific head coach, and did a tremendous job for us for six-plus seasons. We thank him greatly for his hard work and dedication to our franchise, not the least of which was a Stanley Cup championship. At this time, we simply felt a new voice was needed. Bruce is a proven winner with a great track record, and we are optimistic we can turn this season around under his leadership.”

More on Boudreau at: ducks.nhl.com
Posted by DucksFanZone at 10:45 AM No comments: 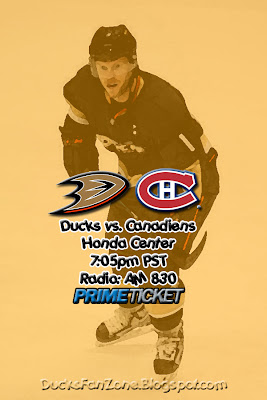 Posted by DucksFanZone at 12:00 AM No comments:

Email ThisBlogThis!Share to TwitterShare to FacebookShare to Pinterest
Labels: 2011-12, Ducks vs. Canadiens, Game 24 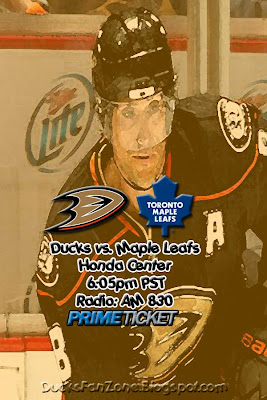 Posted by DucksFanZone at 5:20 PM No comments: 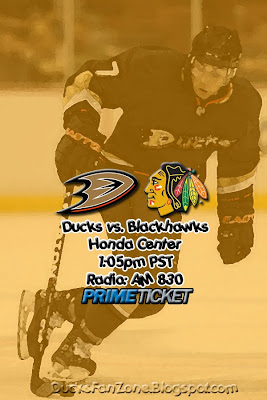 OPINION:
I was really hoping the Ducks would teach me a lesson for missing one of their spectacular games to be a responsible retail worker and attend to the obligatory Black Friday duties, but they didn't. I don't think anyone understands how much it kills me to miss a game. I died a little today after a temper tantrum that included kicking my feet. Life went on and I caught the DVR'd version (I can FF through the bad parts! Yay!) and I think there are positives to be brought out of the game, along with some ever present negatives.

On the plus side, RPG finally made an appearance in this game, in a pretty big way. Our 2nd line continued to do their job. & for 40 minutes, the Ducks played some solid hockey.

On the negative side hockey games require 60 minutes of solid hockey, not 40. And our defense is still figuring out how to defend. The guys had a lead and thought they could sit on it. I'm somewhat thankful they were shown that doesn't exactly work, but at the same time, I wish it would have.

November is almost over. We get to host two teams that don't come here often for the remaining November games. Toronto will be here Sunday and we'll see Koivu's old team the Canadiens on Wednesday. I've come to expect losses around these parts, but if they figure a win or two into those games, I know a lot of Ducks fans who would appreciate it.

POST GAME QUOTES:
"We came out with the energy that we wanted and got the lead. We didn’t finish the game the way we wanted," said Ducks captain Ryan Getzlaf. "We are very concerned. This is not something that we’re willing to accept around here. We have to change the mentality. The start of every period, we have to treat it like it is 0-0 and learn how to win those kind of games."

"We came out in the third and it was two within a minute. Then, the game just dramatically changes," said Bobby Ryan, who broke a scoring slump with two goals. "You could almost feel the tempo change on the bench. Guys got down. That’s the sign of a team that has been accepting it for a little while. Two goals within a minute span, both on our line, is heartbreaking. If you could put a finger on it, it would be easy to get out of it."

"A little bit of panic sets in when we get scored on," Getzlaf said. "It’s a tough thing for us. We have to find a way to change that. I have never been in this kind of rut in my career so far. Most of the guys in here are with my in that boat. That’s a tough lesson to learn." 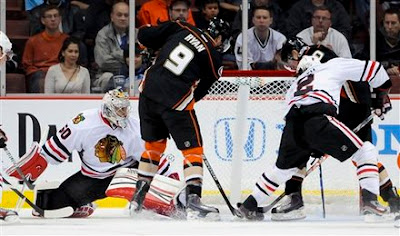 Email ThisBlogThis!Share to TwitterShare to FacebookShare to Pinterest
Labels: 2011-12, Ducks vs. Blackhawks, Game 22 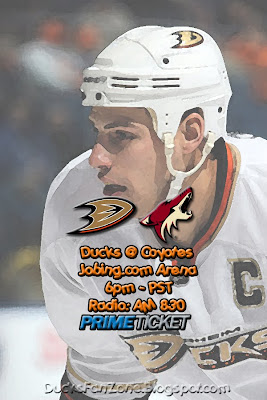 POST GAME QUOTES:
The Ducks were apparently speechless after yet another loss. No quotes. 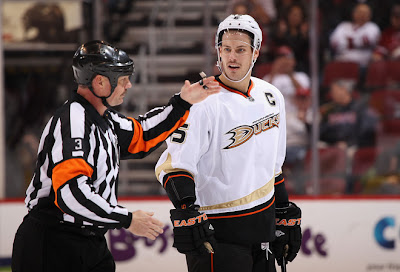 GLENDALE, AZ - NOVEMBER 23: Ryan Getzlaf #15 of the Anaheim Ducks reacts to referee Mike Leggo after a interference penalty during the thrid period of the NHL game against the Phoenix Coyotes at Jobing.com Arena on November 23, 2011 in Glendale, Arizona. The Coyotes defeated the Ducks 4-2. (Photo by Christian Petersen/Getty Images)
Posted by DucksFanZone at 5:08 PM No comments:

Email ThisBlogThis!Share to TwitterShare to FacebookShare to Pinterest
Labels: 2011-12, Ducks at Coyotes, Game 21 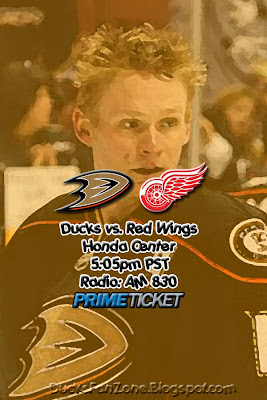 POST GAME QUOTES:
"It’s very frustrating and almost the cruel side of sports," said Ducks coach Randy Carlyle. "We made enough mistakes that cost us the hockey game. There is no other way to describe it. We again mounted a comeback in the hockey game, but it just seems that we’re one goal short again."

"It’s tough. It’s a new experience for us here," said Ducks captain Ryan Getzlaf. "We have to find a way to dig ourselves out of this thing."

"I thought we came out of the gates okay. We still dug a hole," Getzlaf said. "There is no doubt about that. The score doesn’t lie. At some point during the game, we let ourselves get down and get behind."

"I think things picked up when we started hitting them and playing physical," said Andrew Cogliano. "With a team like that, you have to take the body and stall them. That is how we got turnovers and started making more plays. Other than the first 20-30 minutes, we took the game to them."

"It’s not a matter of what I can say now," Getzlaf said. "We are in a situation where we have to play ourselves out of it and that includes me. I just have to keep playing and we have to lead by example. Our group here, who I have been with for a little while, we have a great core of leaders and we just have to keep pushing." 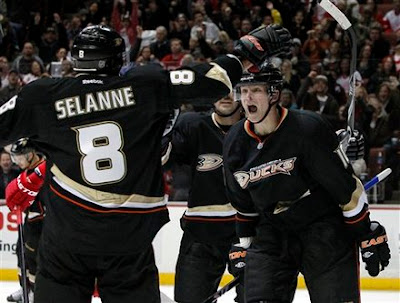 Banner Credit: Bucky Hermit @ duckstowels.blogspot
Game Day Graphics are now made by me, if you would like to use them please ask first, chances are likely I will say yes, but it is courteous to ask before taking. Thank you!

DucksFanZone
This blog contains game day posts with all the details you need to know about the game, it features post game quotes from the players so you can get their point of view from the game, and in the off-season it contains news stories on a need-to-know basis. I might make comments here and there in some posts that should be considered MY opinion and/or point of view and should not be taken as FACT. I am not affiliated with the Anaheim Ducks team, I am just a fan of the game and a fan of the Ducks. If you have suggestions for how I can improve this blog feel free to drop a comment. If you wish to contact me I can be reached at vickyswanson8@gmail.com - kthnx.